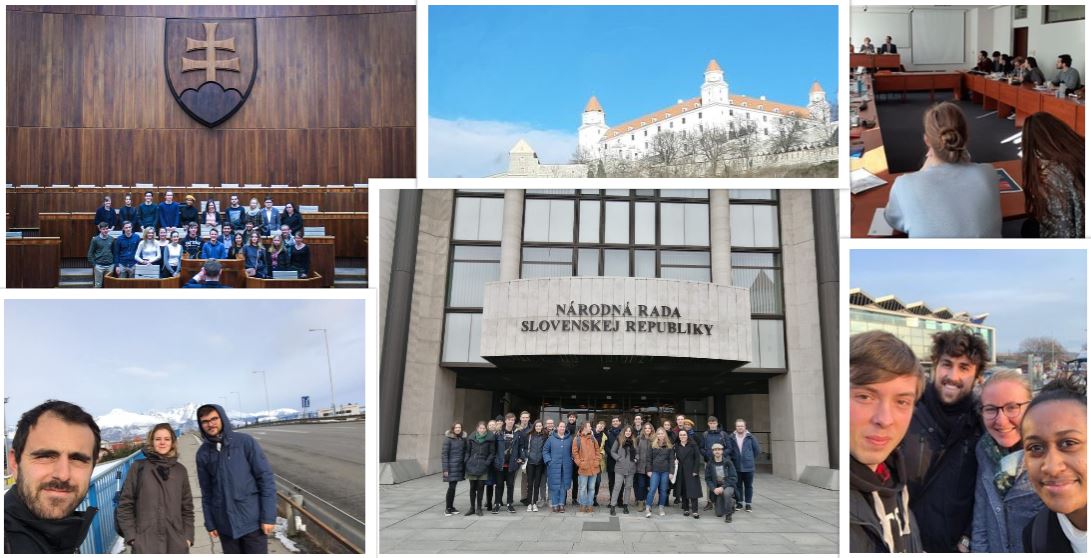 AEGEE Election Observation provides a youth perspective on elections in Europe. This is done by deploying young people on election observation missions to gain experience in election monitoring and to specifically assess youth engagement in the electoral process as voters, candidates and civil society members.

AEGEE Election Observation Mission to the Slovak Republic deployed 28 observers of 15 nationalities to observe the 29 February 2020 Parliamentary Elections, making it one of the largest election observation missions in the country. The observers arrived in Slovakia on 21 February and will depart on 2 March. Prior to their arrival and in line with AEGEE election observation methodology, the observers completed an e-learning course for election observers and undertook research on the election process. Upon deployment, they met with and interviewed various stakeholders, including election administration authorities, political party and civil society representatives and other international observers. For the Election Day, observers were sent to seven regions (kraje) of Slovakia, such as Bratislava Region, Trnava Region, Košice Region, Banská Bystrica Region, Prešov Region, Trenčín Region and Žilina Region. They visited a total of 115 polling stations and followed opening, voting, closing and counting procedures.

These preliminary findings of AEGEE Election Observation Mission to the Slovak Republic cover both the overall electoral process and Election Day observation.

According to the Slovak Election Law, anyone interested in observing the process of voting and vote counting has the right to be present in the polling station without the need to be accredited. AEGEE Election Observation welcomes this accessibility that provides for election observation without bureaucratic impediments. On the other hand, the overly broad formulation does not mention all stages of the electoral process and therefore leaves space for inconsistent interpretation by election officials on how to deal with election  observers, in particular before the opening of the vote. Overall, election commissions were cooperative and did not restrict AEGEE observers in their observation.

With 65,80%, voter turnout announced by the State Election Commission constitutes an increase in comparison with previous Parliamentary Elections (2016), when 59,82% of voters came to the polling stations. In the polling stations visited by AEGEE observers, it is estimated that approximately 14,5% of voters were young people aged between 18 and 30 years old. The possibility to vote by a voter card facilitated the participation of young people studying and working outside of their hometown.

The Ministry of Interior, as envisaged by law, conducted education campaign, providing information on voting procedures and competing candidates, which was accessible on its website, through municipalities and in the polling stations. However, there was no large-scale voter education campaign directly targeting youth and first-time voters. Positively, a number of youth civic education programmes are run by civil society  organizations on a local level. Nevertheless, AEGEE mission did not encounter any domestic observers throughout Election Day.

The average percentage of candidates under 30 years old across all party lists for the 2020 Parliamentary Elections was 10,3%, which represents a decline compared to 15,4% in 2016. The highest number of young candidates on a party list was 23 while one party did not nominate any candidate aged 30 or under.

In the polling stations visited AEGEE observers noted that young people aged 30 or younger represented 17,1% of commision members and in 21% of the cases the chairperson was under 35.

Election Day procedures were conducted in a transparent and organized manner. While the overall assessment of the opening and voting is positive, a weaker understanding of closing and counting procedures was observed. In addition, the layout of different polling stations visited, in particular the inadequately positioned voting booths, in many cases did not guarantee the secrecy of the vote. Although there was a possibility to request a mobile ballot box, full participation of people with disabilities was not ensured as  70,5% of polling stations visited by AEGEE observers were not accessible to voters with physical impairments.

The detailed findings of the Mission will be presented in a final report drawing on research conducted during the campaign period and Election Day observation.